This driver should be in kernel 3.15

A staging driver will appear in kernel 3.14, The "final" version should be in the normal wireless tree by kernel 3.15.

This module is used in the HP Chromebook 14, model 14-Q030SG (according to the label on the back of the notebook).

The last revision of this model was C1, and had a Broadcom SoC. This one, however, appears to be powered by a Realtek SoC.

The firmware revision on my unit is IN_1.08; D-Link has both country-specific and revision-specific firmware for this model.

Some images of the unit:

Here's some more info on the router:

I went to the wikidevi page below to install the driver for Windows 7 for the (edit: for the Panasonic DY-WL10)

It started the update driver process and seemed like it was going to install the driver!
Then I got a message that "a hash could not be found" and that the file was either corrupted or had been tampered with"
Can someone help? Thanks.....

The .inf file should be the only modified part of the driver - everything else was identical to the vendor's driver set
You may want to try the older one, otherwise I'll look into it when able
--M86 (talk) 20:47, 22 December 2013 (EST)

I started a thread over at OpenWrt, and I want to "donate" the images I made to anyone that may find it useful. As Wikidevi does not yet have that model, feel free to use the images from that thread. I was not allowed to upload them here as I am unregistered. Thread with Images

Noted.. but you may wish to submit them to Wikimedia Commons in the future. They will then be available to any MediaWiki instance w/ Commons support enabled.. and have an infobox clearly stating their license, authorship, date taken, etc..
--M86 (talk) 18:46, 5 December 2013 (EST)

Are driver for this device also for Windows 8 avaliable?

Trying to coerce it now. Tried with bundled drivers from Asus, the driver loads, the card works somehow, but doesn't see anything. There's newer driver at http://www.mediatek.com/_en/07_downloads/01-1_windowsDetail.php?sn=5034, but still doesn't work.

Drivers on the site for SMCWUSB-N2 are not recognized by Windows 7. Any alternatives?

You will need to modify the inf file to include the USB ID for this dongle - it is not in there now.
Open the Win7 inf file you need (x indicates a 64-bit target), and add it in (should look similar / identical to the below line)

Failing that, just use the vendor's driver.

Version number of this unit is at 1.6 (PCB ver. 1.3). It has green LEDs now (early units had searchlight-like blue ones) Some parts have changed (Atheros chips are the same, not counting subversions and manufacturing countries), RAM module changed. Power supply also changed. Should you be interested adding it to the site, I can provide all necessary data.

I bought a Tecknet adapter from amazon de:http://www.amazon.de/TeckNet%C2%AE-300Mbps-Dualband-Wireless-WPA2-Verschl%C3%BCsselung/dp/B00E38ALDG This one looks like 2 drops of water to the mentioned WS-WN688N5 adapter (it does not have the uspeed label on the front). It even has the type indiction:WS-WN688N5 REV.D on the back. It does not use the realtek driver mentioned. In fact it is a RAlink RT5572 (from lsusb:148f:5572 Ralink Technology, Corp.). It works with the following driver:http://www.mediatek.com/_en/07_downloads/01-1_windowsDetail.php?sn=5032

Is this a new version/revision (so soon) or is it a mistake?

It is probably a new one. Whomever is manufacturing these things will likely switch things around whenever it is convenient to do so.
I'll toss a new entry up for this particular one. Thx, btw.

product link: http://www.tp-link.com.cn/product_230.html (only available in Chinese)
--—The preceding unsigned comment was added by person (talk • contribs) . Please sign your posts with ~~~~!
Noted. It has been added. (Thx.)

The driver listed does not work well with AWUS036NHA. The best driver I found to work with it is the one from ALFA's website. The TP-Link driver pulls very few connects and just drops them after connecting. The ALFA driver has been the most reliable despite being an older base driver.

I believe the original driver CD is also mirrored here - it's linked to on the page (but not the infobox). .. it's not extremely surprising that the TP-LINK driver does not work well with the thing..

Hello!My name is Cosmin and i want to ask you,what kind of adapter is compatible

with Panasonic TY-WL20 TY-WL20U TY-WL20E Wireless Lan WiFi USB Adaptor Dongle.
Can you tell me,please 1 or 2 brands witch are compatible with those one?
Thank you verry much!

It seems that they provide Linux driver for this USB 3.0 802.11 ac adapter. I ordered one online. I will let you know if it works. This is the only AC adapter for Linux that I can find so far.

2013-07-26 Update I can confirm that edimax EW-7822UAC provide Linux driver. I successfully compiled its driver and connected it in Fedora 19. The download speed can reach average 15MB/s and peak 20MB/s by using perf.

I found an updated version of this driver for 3.10+, and can confirm it works with my EW-7822UAC: https://github.com/abperiasamy/rtl8812AU_8821AU_linux
--—The preceding unsigned comment was added by some guy (talk • contribs) . Please sign your posts with ~~~~!

Could you please check if it does work in AccessPoint (AP) infrastructure (master) mode under GNU/Linux with hostapd?

From my limited testing, no - the 8812au driver does not currently work w/ hostapd (nl80211) or an older Realtek modified hostapd. A newer Realtek hostapd build may get it to work, however. The one I used was targeted for use with 81xxCU devices (and may have been outdated even for those..).

Uh, well, I guess I (or anyone else that feels like it) can - it will not take too much effort.

This page[1] said to let you know when a linux driver was available for this chipset? Well, there seems to be one floating about.

[2]
[3].
I used it on my raspberry pi and it works for me. I hope this was a useful contribution.

Thanks for the awesome info on this wiki.

It is indeed useful. I found the same source also at https://github.com/liwei/rpi-rtl8188eu without the full kernel tree included (not that it really matters). I'll toss it into the driver template in a sec so it will show up for all rtl8188eu(s) devices...
Thanks.

the driver probably won't work properly with ndiswrapper (from my testing w/ x64 systems, it crashed instantly anyway) - it doesn't even work properly in Windows (at least in XP). a native driver (or maybe vista/7 driver support in ndiswrapper) will likely be required for proper functioning

Hi, Thanks for you windows driver.It works fine on Win 7 but i can't install it on XP. Thanks

Hi, thanks for the link, i tried this driver but it doesn't work better :(

Hi, i tried both these two drivers but it doesn't work :( .Xp tell me it doesn't find any driver for this device at this location when i specify manually the folder where i extracted driver files. Thanks

yes, but please wait, will look into at some point soon

give 5.100.68.46 a shot. check the inf file if it fails to install. I have not done exhaustive testing, btw, there are potentially other issues

Hi, I was trying to install the uwb-br100 to my pc. I downloaded the driver you provided, but I have two problems. there is no install file, only the sys file, which I dont know how to install if not going to the device itself and ask for update the driver. Well, my second problem is that I cant do that, because windows 7 dont see my sony dongle. So how can I proceed please, this is top priority for me at the moment.

Whenever I try to install it. My device becomes inactive.

This driver may not have all the necessary stuff in the inf file to initialize it properly. I would suggest trying the one available on TP-LINK's website, if you haven't already.
--M86 23:15, 28 November 2012 (EST)

Can you install it on windows server 2012 been trying for days with V3 drivers, disabling signed signatures and manual work-arounds in the device manager.

I noticed on the article for this router you wrote that TomatoUSB works with it as of 10/13/2011. Do you know where builds this recent can be found, and which type of build should be used?

Dear M86 my junxion box don't boot anymore, can you make an image of the CF card on your unit and share it please?

I greatly appreciate your help! Thank you.

Hey, do you know any working alternative for this Stick? The TP-LINK TL-WN821N uses similar Chips, but you mentioned something about "Sony locked their devices to the 0411:017f USB ID". If there is no alternative, how can I modify the TP-LINK Stick to also use the 0411:017f USB ID? (If this is even possible?) Thanks in advance and also thanks for the information already given by you. 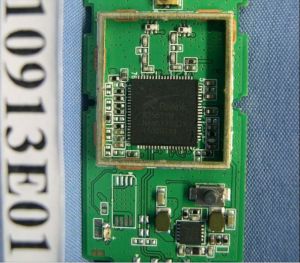 You can check out the internal images at the FCC site by plugging the FCC ID (KA2WA160B2) in into the FCC website ( http://www.fcc.gov/oet/ea/fccid/ ). It is clearly identifiable as a RT5572 through there. If you don't feel like doing that, take a look at the image to the right.
In Linux, you can confirm the chipset by enabling CONFIG_RT2X00_DEBUG and recompiling rt2800usb (best to use compat-wireless). Then when the device is plugged in and recognized by rt2800usb, a line ('Chipset detected - rt: xxxx, rf: yyyy, rev: zzzz.') will be output by the module and logged into dmesg. I modified the line into a printk so it would output all time without debug set.
--M86 01:16, 12 April 2012 (EDT)

on your page http://www.wikidevi.com/wiki/Sony_UWA-BR100 you said to let you know if I can't get the drivers to work. I can download the zip file, but what do I with it then?

i've done everything, and i am at the top of my despair. I've installed the wn821n v3 drivers, but it keeps disconnecting and i keep recieving the BSOD!!!athurx.sys is fault.
i run windows 7 64 bits. tp link version crashes, another version crashes, your version crashes, a 4th version device doesnt start.
Please help!
--—The preceding unsigned comment was added by 78.43.163.173 (talk • contribs) . Please sign your posts with ~~~~!

Yeah. Works to a point. Installs fine, but cannot find any networks and therefore cannot connect to them. Using Win7 x64 driver on Server 2008 R2 Standard

i used Ae 2500 by this driver(bcmwl_4323x.zip) ,but it not work in 5g model in China ,can u give me a driver for China
Thanks.
--—The preceding unsigned comment was added by Lishengjing (talk • contribs) . Please sign your posts with ~~~~!